The Canadian Nuclear Safety Commission (CNSC) regulates the use of nuclear energy and materials to protect health, safety, security and the environment; to implement Canada’s international commitments on the peaceful use of nuclear energy. The CNSC disseminates objective scientific, technical and regulatory information to the public.

Tabling of the annual report

This annual report is prepared and tabled in Parliament in accordance with section 72 of the AIA.

I. Requests received under the Access to Information Act

In 2017–18, the CNSC received 289 requests under the Access to Information Act (two requests more than in the previous reporting period).

The CNSC also processed 37 informal requests during the reporting period. Seven of these were internal requests for a review before documents were released informally on the external website or by other means. A total of 30 informal requests were for previously released AIA packages identified on the "Proactive disclosure" page of the CNSC website.

For requests closed during the reporting period, the CNSC processed a total of 38,507 pages and disclosed 14,121 pages to requesters. This represents a 28-percent decrease in the number of pages processed in fiscal year 2016–17.

Other federal government agencies and departments responsible for records related to CNSC activities also consulted with the CNSC on 33 occasions. The CNSC processed 601 pages for these consultations. 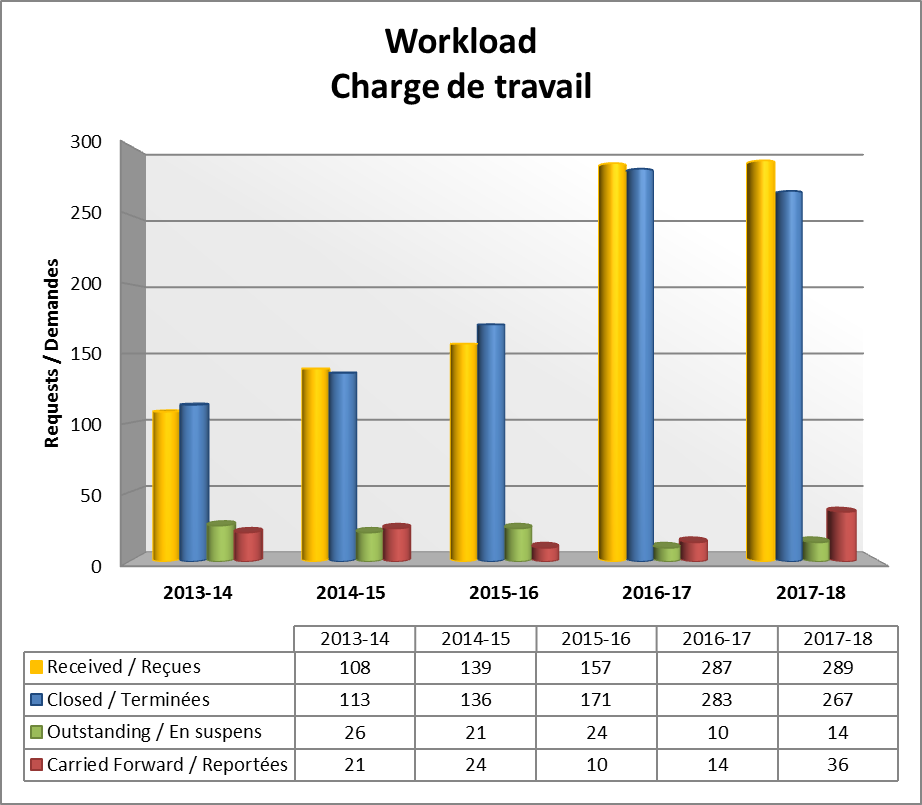 The organizations continue to submit an increasing number of requests to the CNSC. In 2017–18, requests were made most frequently by organizations (85 percent), followed by members of the public (8 percent) businesses (5 percent), media (2 percent) and academia (0 percent). 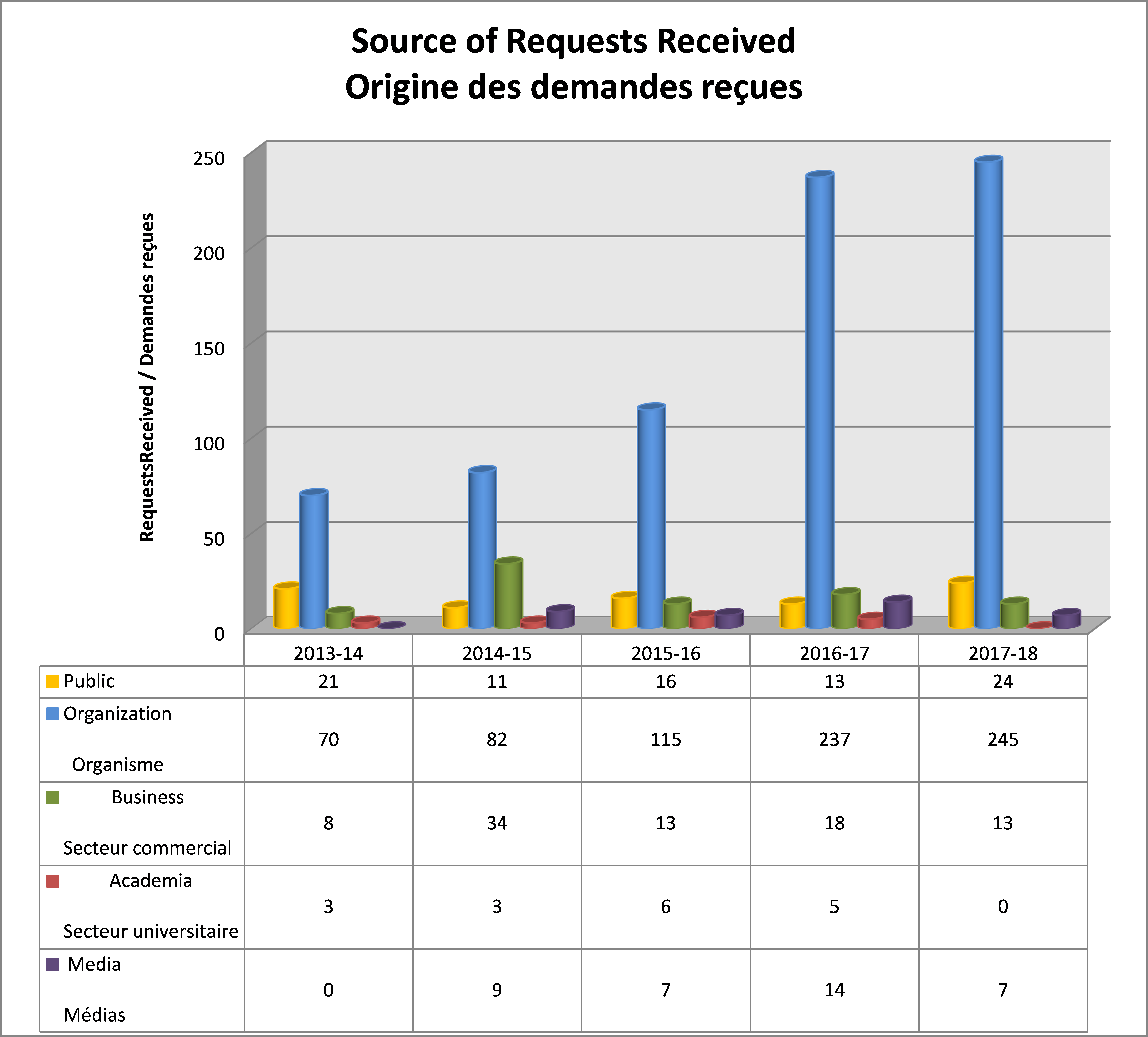 In 2017–18, the CNSC closed 267 requests. This represents a slight decrease compared to the 283 requests closed in 2016–17. Of the 267 requests closed during the reporting period, records for 42 were disclosed fully, while records for 43 were disclosed in part. There were only 21 requests for which relevant records were exempted in their entirety. The remaining 161 requests were either abandoned by the requester, transferred to another government institution or had no records associated with them. 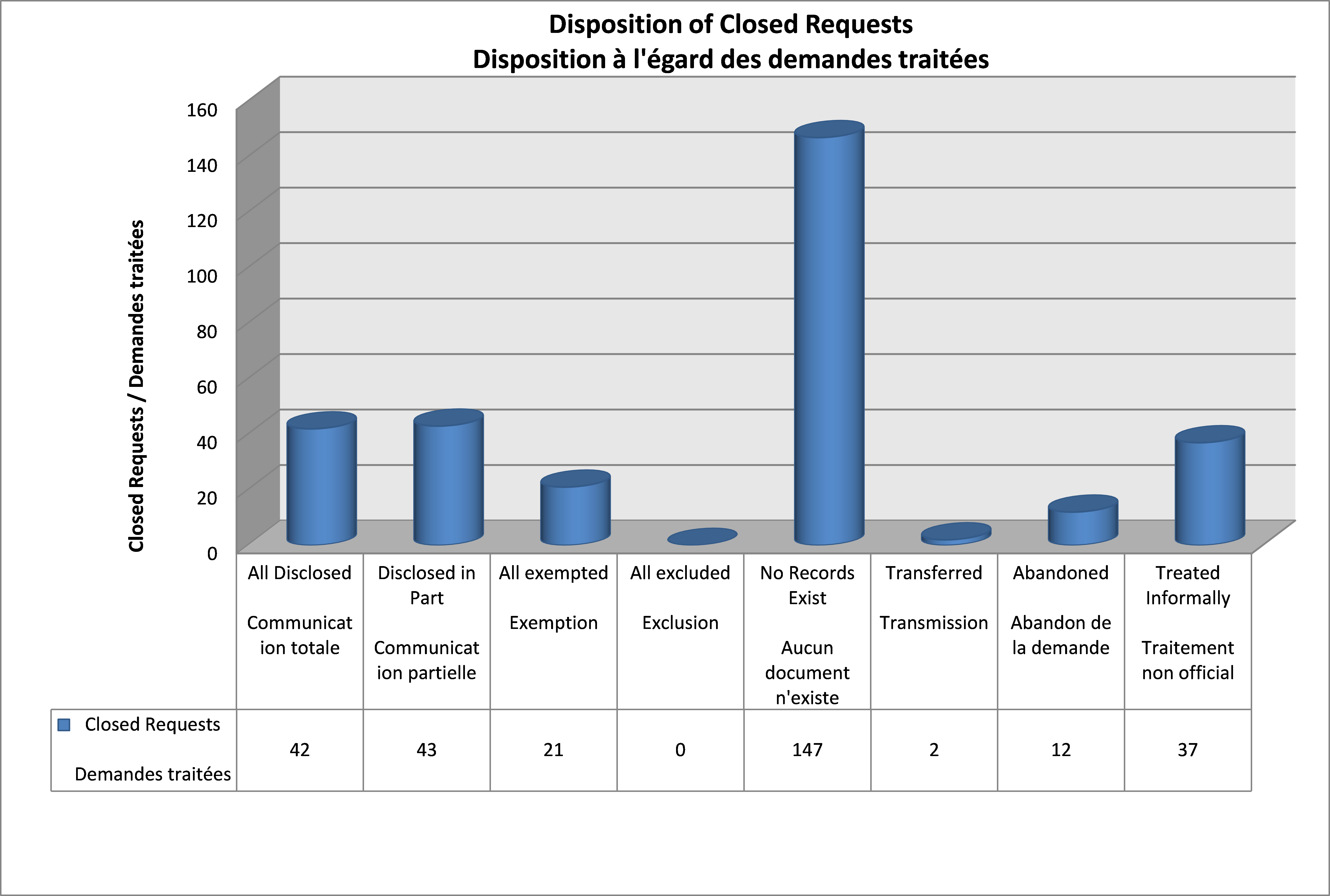 Section 9 of the AIA permits an extension of statutory time limits under certain circumstances. In 2017–18, the CNSC requested extensions on 48 occasions. In five of these cases, an extension was required to provide third-party notifications. In 18 of these cases, an extension was required for consultation within a government institution, other government institutions or other levels of government. Because of the increase in the volume of records processed at the CNSC, a further 25 extensions were needed (since searches through large volumes of records made it impossible to meet the original timelines without interfering with CNSC operations). Most of the extensions were for 31 to 120 days.

Access to information requests are received by the Records Office and forwarded to the ATIP Office, IMD. Staff members in the ATIP Office process requests in consultation with the appropriate CNSC directorates and with external parties, where necessary.

The CNSC has three full-time employees, and one part-time consultant dedicated to access-to-information activities.

During 2017–18, the CNSC continued to concentrate on providing formal training on information management, the Access to Information Act, the Privacy Act and information security to its employees. This training was provided over seven sessions during the reporting period to 210 employees and focused on informing them of their responsibilities in those areas. IMD offers an integrated training approach, emphasizing the connections between sound information management practices and an effective ATIP program. The ATIP Office also provides advice and support as required.

Documentation and training materials on the CNSC’s ATIP program are available through its corporate intranet, along with links to other materials, such as legislation, Treasury Board Secretariat policies and guidance documents, and a range of information management and guidance tools. The CNSC did not implement any new policies, guidelines or procedures during the reporting period.

As an organization that values openness and transparency, the CNSC strives to ensure that information is made publicly available without recourse to the AIA. Exceptions to public access to information are limited and specific, as required by the Act.

The CNSC frequently makes copies of the following documents available to members of the public for their examination:

The CNSC also posts, via the Open Government portal, summaries of completed access to information requests processed by the ATIP Office.

The Governor in Council has delegated to the President of the CNSC the authority to exercise the powers, duties and functions in the Access to Information Act. In turn, the President has designated the Vice-President of the Corporate Services Branch, the Director General of the Information Management and Technology Directorate, the Director of the Information Management Division, and the Senior ATIP Advisor to exercise his powers, duties and functions with respect to the Access to Information Act.

See Annex C for a copy of the instrument of delegation.

The CNSC achieved a compliance rating of approximately 91% for completed access- to-information requests closed within the legislated timeframe in 2017–18. Many factors led to this rate of compliance, including an electronic retrieval system in use since 2009. This electronic system has reduced the time needed for the ATIP Office to receive the required documents and prepare the files for review and approval. The ATIP Office has established a five-day service standard for subject matter experts to retrieve relevant records and obtain director general sign-off. In addition, through training and awareness sessions, CNSC staff members were generally receptive to their obligations under the Access to Information Act and delays were reduced.

5. Complaints and appeals to the Federal Court

In 2017–18, one new complaint about deemed refusal applied to a request was registered with the Office of the Information Commissioner.

There were no complaint investigations carried over from the previous year.

As always, the CNSC will continue to work closely with the Office of the Information Commissioner to resolve the remaining ongoing complaints in a timely and efficient manner.

No appeals were made to the Federal Court of Canada during 2017–18.


Note: All requests previously recorded as “treated informally” will now be accounted for in this section only.


Part 5: Consultations Received From Other Institutions and Organizations


Part 9: Resources Related to the Access to Information Act